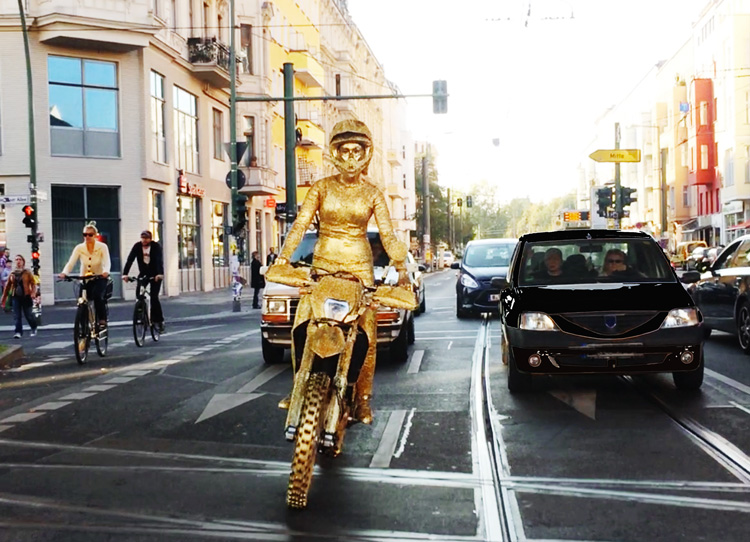 Ina Viola (born in Heidelberg, Germany) lives and works in Berlin, Germany. She studied under the sculptural artist Tony Cragg and completed a Masters of Fine Art at UDK Berlin under Florian Slotawa and in 2006/ 2007. An exchange at California Institute of the Arts, studying under Sam Durant, Michael Asher, Marcos Raminez, Charles Gaines and many more, where she participated in the MFA Art Program.  She has exhibited in a variety group and collaborative projects and exhibitions in Berlin, California, Austria, England, Denmark.
Ina Violas’ practice spans sculpture, installation, drawing, photography and music and reflects on situating small, individual moments, and the individual themselves within a contemporary context which is becoming increasingly over-loaded and over-stimulated.
Cutting out, framing and zooming-in like a camera lens on a contemporary panorama, Ina Viola shifts focus to simple elements which have become lost. Often referring to simplicities like the movement of grass or the sound of being alone, Ina Violas work gives back a concrete reality to our flux, taking the viewer through alternate tangents in the panorama. In their clearness and simplicity, these objects and their thoughts reflect on our own vulnerabilities and humours in essentially being ‚caught-up.‘ In many of her sculptures and videos, objects which reference power structures of the individual and the society are central. Often turning our expectations on their head, Ina Viola transforms these potent symbols into poetic contemplations on fragility.
Since 2011 Ina Viola performs with the electronic Artist Collective TANGOWERK. Their second Album was released end 2014, since then she also started writing her own tracks, whereas the first one was released also on the Berlin R.O.T- Label in November 2015.

„Thank you to all my friends and colleagues for the fantastic fotos, videos, texts, ideas, inspirations, journeys, support and the color in my life.“

Ina Viola, a sculpture artist in time-based poetry, creates multi-layered sound installations with her voice. Inspired by her extensive off-road biking trips and travels, she always returns with pictures and basslines that direct her to these Electronic Blues songs.

In her sculptures, motion is typical an interplay of multiple elements referencing phenomenological simplicities like grass moving or anechoic sounds - like the sound of being alone.

In their simplicity, her work reflects on human vulnerabilities and humours it as a condition as an 'essential being-caught-up`.